gifted with a great talent, he can draw, paint and be a sculptor as well.

His drive to create always new objects made him an artist with a long service record,

always looking for the highest score of perfection, characterized by perfect craftsmanship.

He has specialized himself in the art of casting, bronze and silver,

so he can perform his models as he wants to. Specially in the combination bronze and stones.

His bronzes are a collector’s items for many..

Willem van Beelen today, is a sculptor, whose life is dedicated

and connected with the Arabian horse.

He passes his days in his studio, sculpting or designing, preparing

new models in clay or wax, and sometimes he is travelling around the world,

visiting horsebreeders, watching their horses , inspiring himself for

the making of new sculptures.

The Career of Willem van Beelen

His artistic career nowadays is turning around this object in all his forms,

His bronzes are well known in the world of the arabian horsebreeders and enthusiasts.

by these people who are sharing this passion for this so very fine and elegant creature.

that makes that creativity can flourish and gives him the urge to create.

And just because he is having so much inspiriation for making new things,

he is co-operating with some well-known art casting firms now ,

so they can help him to find more time, for the making of all these ideas he

is having in his head and want to be realized. Willem van Beelen really hopes that

of the Founder of the Kingdom of Saudi Arabia, King Abdul Aziz Al Saud,

for the realizing of the book : Legacy of Saudi Arabia,

and the Arabian Horses of the Kingdom.

There is also made a sculpture in bronze of this portrait.

For the Ministry of Foreign Affairs of Saudi Arabia he made various sculptures,

His life size fillies travelled to the courts of Ajman, Sharjah and Saudi Arabia.

The first 1988 bronze editions that

appeared had enthused the international

collectors worldwide that no single

The pieces are so well sought after because

- is an international recognized painter

and sculptot from the old school.

His tremendous expressionism is shown

by the highest handcraft perfection and

horses at a horse farm belonging

to a friend. His wonderful sculptures

enthuses horse lovers all over the world. 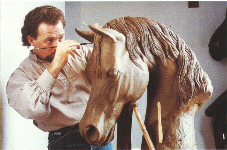